“Shake the Dust” is a feature documentary that tells the stories of break-dancers in struggling communities around the globe that, although separated by cultural boundaries and individual struggles, are intrinsically tied to one another through their passion for break-dancing and hip-hop culture.

Hip-hop culture as a whole, with b-boying as one of its pillars, was born out of the Bronx in the 1970s from people that were underrepresented, impoverished, and surrounded by violence.  From its inception, hip-hop was a source of energy, community, strength, expression, and passion.  And in the years since its inception, hip-hop has become far more than just a musical genre or style of dance– it has stretched itself across the globe as one of the most influential and trend-setting sub-cultures that exist.

Hip-hop music, through rhythm and poetry, tells a unique story–it balances on a line between party music and prophesy.  ”Shake the Dust” is one piece of that story– a story of wildness and grace.  A story that seeks to show the beauty of individuals in places like Sana’a, Yemen, Kampala Uganda, and Port au Prince, Haiti. A story that shows how breakdancing– which seems to be transcending even hip-hop itself– ties them together and gives them hope. 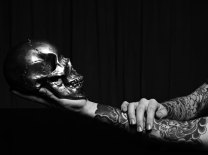